The British Army introduced a new item of clothing in 2005 to accompany their Osprey Body Armour- the Under Body Armour Combat Shirt (UBACS). British soldiers in Afghanistan had been having problems with overheating when on patrols and wearing body armour- many indeed had taken to wearing t-shirts under their armour which offered no protection to the sleeves at all. Having been to the relatively cool climes of Cyprus and fired on a range in 40 degree heat wearing uniform, helmet and body armour I can attest to the exhausting effects of the heat. To overcome this problem the UBACS has a design that incorporates an open weave body, to reduce heat fatigue under the torso armour, with padded arms that protects the soldier’s arms in urban environments or if he has to fire from the prone position. The shirt was trialled by special forces in 2006 and became standard issue in 2007. This first batch of shirts was made in Desert Disruptive
The main body of the shirt is made of a self-wicking fabric called Coolmax, that draws sweat away from the skin and is more breathable than traditional fabrics. A zip secures the neck, which is edged in the DDPM fabric
The arms are made of infra-red resistant (IRR) fabric, heavily padded with neoprene inserts to offer protection- this in turn is broken down into a number of separate pads to give the arms some flexibility
These also help reduce rubbing at the edges of the armour, such as around the shoulders. On the upper arm is a small pocket, with a Union flag sewn onto the flap and three strips of Velcro to allow the attachment of removable insignia

This is new never issued Surplus in package. 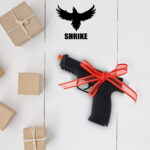 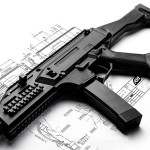 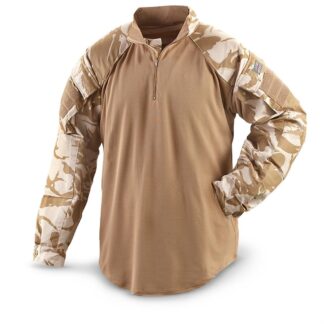